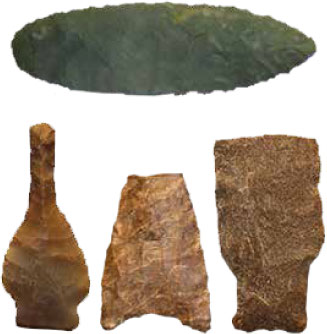 While we work across many territories, Circle’s head office is located in Calgary, AB, in the traditional territories of the Blackfoot Confederacy, which includes the Siksika, Piikani and Kainai Nations; the Stoney-Nakoda, including the Chiniki, Bearspaw and Wesley Nations; and the Tsuu’tina Nation. Southern Alberta is also home to the Métis Nation of Alberta, Region 3. Our Edmonton office is located in Treaty 6 Territory and within Metis Nation of Alberta, Region 4; we acknowledge this land as the traditional territories of many First Nations such as the Nehiyaw (Cree), Denesuline (Dene), Nakota Sioux (Stoney), Anishinabae (Salteaux) and Niitsitapi (Blackfoot). We also have a seasonal office in Williams Lake, BC,in the unceded territory of the Secwepemcúl’ecw peoples; Williams Lake is also currently the home of T’exelcemc (Williams Lake Indian Band) and Xatśūll (Soda Creek) First Nations, as well as many Tsilhqot’in (Chilcotin) people.

We are professional archaeologists who share a common mission: to protect and promote understanding of historic resources. We believe in a balance of practical growth and development while preserving our cultural resources for future generations. Through great teamwork and collaboration we deliver consistent, quality historic resource services that exceed our client’s expectations.

Meet our team of archaeologists! 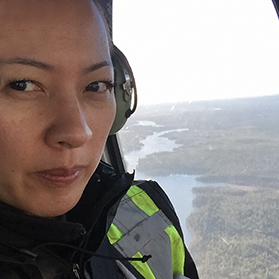 Margarita has over 20 years of extensive archaeological experience and knowledge in all services related to historical resource consulting. She is an approved permit-holding archaeologist in Alberta, Saskatchewan, Yukon and the Northwest Territories. Throughout her consulting career, Margarita has managed many large scale HRIAs and HRIMs, and recorded numerous historic resource sites. Her experience includes field assessments and mitigations for projects ranging from small-scale oil and gas to Class I pipelines and Forestry Management Areas, as well as infrastructure, power, residential/industrial subdivisions, and other developments in the private and public sector.

A graduate of the University of British Columbia, Simon Fraser University, and Durham University (UK), Margarita holds degrees in both Archaeology and Economics. Her Masters studies involved relational artifact analysis of three sites in central Europe: Austria, Hungary, and the Czech Republic. Upon completing her studies, Margarita spent 5 years working in Europe on a variety of archaeology sites including an Iron Age hillfort in Schwarzenbach, Austria, a complex Roman bath site in Grumentum, Italy and an Urartu fortress outside Yerevan, Armenia. Margarita also founded and co-directed the SVG Public Archaeology Program, a non-profit rescue excavation on the Caribbean island of St. Vincent. With the help of a select team, she completed two seasons of public excavations. 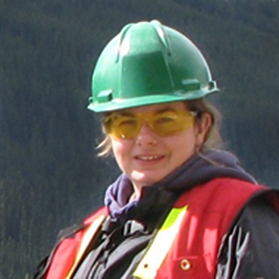 Kristin has over 20 years of archaeological experience, and is a qualified permit-holding archaeologist for BC (Interior Plateau and Sub-Arctic/Boreal Forest), Alberta, Saskatchewan, Yukon, and Northwest Territories. She has been responsible for all aspects of HRIA/AIA and HRIM work for small to large-scale developments throughout these regions. With extensive experience in GIS, Kristin is responsible for much of the mapping and desktop assessments conducted at Circle. Having earned an M.A. and M.Sc. applying GIS to archaeology, her masters thesis focused on the creation of a 3D model of the Lucanian site of Roccagloriosa in southern Italy and the Lunt Roman Fort near Coventry, England. Kristin also worked a number of years as an archaeologist in England, and has developed archaeological management and predictive models for large-scale operations in northern Alberta. 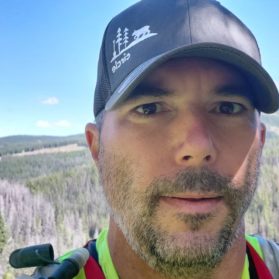 Jode has over 20 years of archaeological experience, 13 of which have been spent in Alberta as a field archaeologist and site supervisor. He is a permit holder for the Interior Plateau in BC. Having worked in a variety of sites throughout Alberta, BC, Ontario, Jordan and the Caribbean, he is highly knowledgeable in diverse archaeological assemblages. In 2011/2012, he had the opportunity to be Field Director for the SVG Public Archaeology Program on the Caribbean island of St. Vincent. From May to November, he can be found at our seasonal office in Williams Lake, leading our BC team throughout the Cariboo and the Kootenays. When it comes to huffing it through the forest, he can’t be beat. 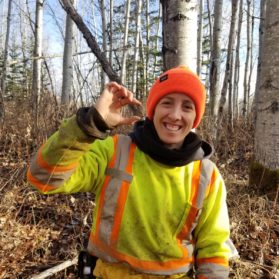 Alexandra began her consulting archaeology career in 2014. She is a permit-holder in Alberta, Saskatchewan, and Manitoba and has participated in HRIAs, HRIMs and large-scale mitigations. Alexandra also has experience carrying out traditional land use assessments with First Nations and managing Indigenous consultation for provincially led developments. She obtained her Masters in Environmental Studies from Lakehead University, focussing on determining the presence and/or absence of the Three Sisters (maize, beans, and squash) from Middle Woodland archaeological components in northern Minnesota. In her spare time, Alexandra enjoys reading and playing board games so we know she’ll be a perfect fit here. Fun fact: Alexandra assisted in excavations at the ancient city of Tel Beth-Shemesh in Israel. 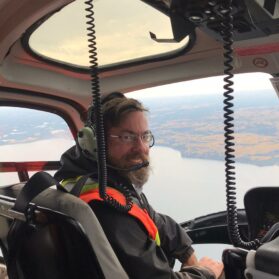 Erik has over 20 years of archaeological experience and is a qualified permit-holder in Alberta, Saskatchewan, and Manitoba. Originally from Sweden, he has also lived in Denmark and the US, earning his Ph.D. in archaeology from UNC Chapel Hill in North Carolina. Having worked in the American Southwest, Southeast, along the Atlantic Seaboard, as well as in Western Canada and the Arctic, Erik has comprehensive experience with all aspects of HRIA/HRIM, from small to large-scale projects for oil & gas, transportation, urban developments, forestry, aggregate extraction, energy, and more. He has also conducted archaeological research in Mongolia, Russia, Crete, and Egypt’s Valley of the Kings, and taught archaeology and anthropology at several universities in North America, including University of Calgary here in Alberta. When he’s not doing archaeology, Erik likes gardening, collecting books, and Swedish heavy metal. Allegedly he doesn’t like cake, but we’re not convinced. 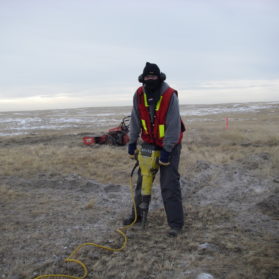 Matt brings two decades of experience to the Circle team, having worked in Alberta, Saskatchewan, the Yukon and the Northwest Territories in a wide range of environmental zones. His Masters research involved the analysis of distribution patterns of tipi rings and other sites near medicine wheels in southeast Alberta, and, notably, he led the excavations of the Hardisty Bison Pound and an associated campsite  that was determined to be among the most important Avonlea sites on the Northern Plains. Matt has led excavations of over a 1,000 square metres in Alberta, and probably participated in 1,000 more. We are excited to have him join our team as he works on his Ph.D., and we’re hoping he brought his luck with him! Fun fact: he doesn’t like winter archaeology. But who does?! 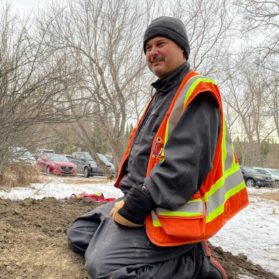 Trevor is a leading archaeologist in Alberta, having published the latest and most comprehensive research on archaeology on the Plains (get it here!). Trevor has a Ph.D. from the University of Calgary and brings 17 years of regulatory experience to Circle. He has worked on numerous significant sites in Alberta and plays a key role in mentorship and regulatory compliance, as well as leading large-scale HRIAs and excavations throughout the province. Fun fact: Trevor’s Blackfoot name is niokska iikimann (Three Feathers); he was honoured with this name in 2014. 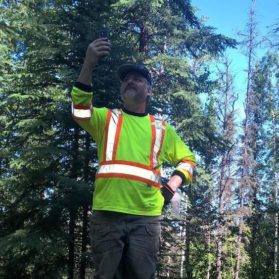 Anthony is originally from Vancouver, and received his PhD from the University of Glasgow in 2011. He has conducted fieldwork in Italy, Scotland and Canada, including BC, Alberta, Manitoba and Ontario. He has recently become a permit-holder for Alberta, and holds an R-License for Ontario. Anthony would like to work at least once in the Yukon or Northwest Territories, as he believes he has a body designed for winter weather. His research interests include globalization, the Mediterranean Bronze Age, and the material culture components of identity formation. In his spare time, Anthony is a self proclaimed sub-par gamer, a neophyte cider maker, a world-class cider consumer, and a fan of several failing sports franchises. He has two cats, one dog, and a bunch of fish. Fun fact: he has an irrational hatred of salad forks. 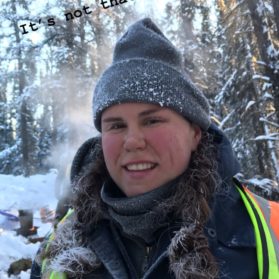 Shannon is a permit holder in Alberta, Saskatchewan, and the Northwest Territories, with extensive field experience in both survey and excavation in BC, Alberta, Saskatchewan, Manitoba, Nunavut and the Northwest Territories. She has also worked in Jordan, and completed an M.Sc. in Archaeology with merit at the University of Edinburgh. Fun facts: she used to sell jade! She also enjoys knitting, reading and writing fantasy in her spare time. 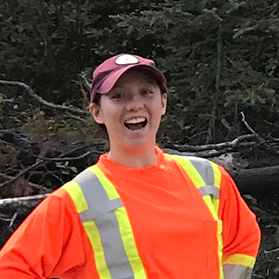 Amanda is a GIS Specialist and field archaeologist with a BA from the University of Calgary; she has participated in excavations in Poland, Guatemala and the Yukon, and joins our field crews in Alberta and BC (whenever we feel ready to absorb her office work!) hiking/sweating/digging/avoiding wasps with the best of them. She initially joined Circle as a GIS practicum student, but we’ve decided to keep her forever! Amanda quickly elevated to a GIS Assistant to our GIS Specialist, and now our Manager of Technical Services. She is a valuable asset to all our initiatives and we look forward to what the future holds for her. Fun fact: She is always down for karaoke. 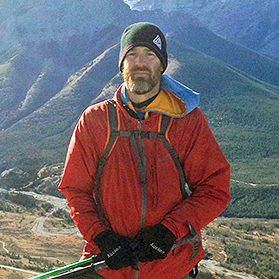 Kyle has over 20 years of archaeological experience in Alberta and Manitoba and extensive experience in archaeological survey and mitigation in a variety of environmental zones: the Montane Cordillera, Boreal Forest, Plains, Parkland, and the Canadian Shield. Kyle holds a BA in Anthropology from the University of Winnipeg and has also dabbled in palaeontology. When he’s not busy studying past remains, Kyle spends his free time in the backcountry of the Canadian Rockies. 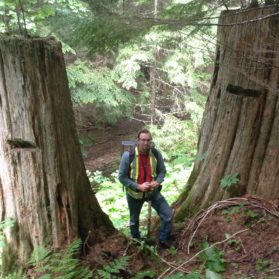 Ewald is an established archaeologist with over seven years of experience across western Canada, having participated in numerous surveys and excavations in BC, Alberta, Saskatchewan Ontario, and New Brunswick. A graduate of the University of Calgary, Ewald is multi-lingual and is multi-talented; he makes his own soaps and is an avid woodworker. If you ever want to learn what it would be like to live as a Victorian, ask Ewald in English, German, or Afrikaans. 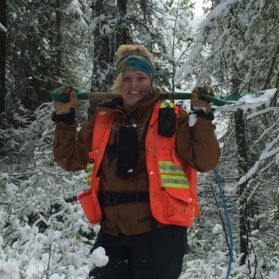 Brooke is a field archaeologist with 7 seasons of field experience including mitigation and survey in BC, Alberta and Saskatchewan. A graduate from the University of Calgary, Brooke has been working in CRM since her university days. She has recently returned to school to do her masters through Simon Fraser University. Brooke is quite possibly the happiest person on earth; she has a great attitude and she snaps into action whenever quads, argos, rhinos or people get stuck. Because of this, she has been designated Circle’s Culture Champion, ensuring morale is always high and our staff are always happy. 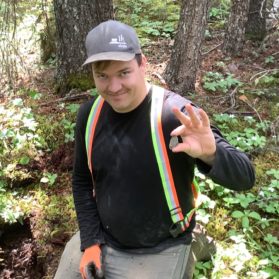 Tyler is a field archaeologist with roots on Vancouver Island but he has worked in various locations in western Canada, including mitigative excavations and survey work in southern and central Alberta, southeast Manitoba, and in the Peace region of northeast British Columbia for the past five years. Tyler received his BA from the University of Victoria, and is a PADI certified scuba diver, as well as a “Magic the Gathering” competitive champion, a jazz musician, and a former soccer pro (ok, we use the word pro loosely). 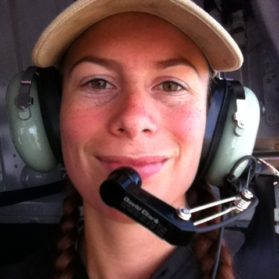 Meg is an archaeologist with 7 years of experience in CRM. She received her B.Sc. in Archaeology from the University of Calgary and has completed extensive archaeological surveys and mitigation in Alberta, Saskatchewan, and the Northwest Territories, as well as in the Caribbean on the islands of Antigua and St. Vincent. She prefers to spend any available time either curled up with a good book or in the mountains, hiking, rock climbing or skiing, and loves travelling or talking about travelling. A little known fact about Meg, she was a  competitive horse rider for 10 years! 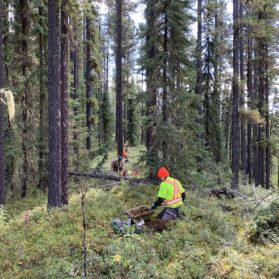 We have a few Assistant Archaeologists that join us each season. Please check out our Instagram for stories and photos of our field assistants.