Next, in our Where in World series, we chatted with Jode MacKay, who is Circle CRM’s BC Senior Project Manager. Jode went away for his first field experience in southern Manitoba after his second year at University (1997). Since then, he’s been working in the field, starting as a student and then eventually moving to supervisor, TA, senior staff and eventually Permit Holder, beginning way back in the year 2000 (hello Y2K). Throughout this time, Jode has worked both globally and locally, in the Middle East, the Caribbean, Idaho, Ontario, Yukon, Alberta and BC. Read on to learn more about Jode and his world experiences!

How long have you worked at Circle?

From the beginning, the little black Tacoma and I were Circle’s first employees, and we probably have the same mileage.

What is one piece of field equipment you can’t live without? 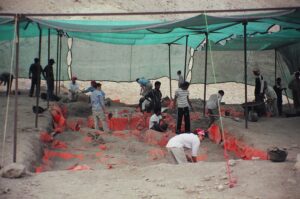 My belt (truly an essential piece of field gear), holds up my pants and keeps my shirt tucked in. I would be a mess without it.

Where are all the places you’ve worked in archaeology around the world?

I spent several field seasons working in the Middle East (Jordan) on surveys, excavations and field schools focussing on the Epi-Paleolithic, through the Late Neolithic, and even throwing in some Classics (Hellenistic, Roman/Byzantine, Iron Age). I worked on two projects in St. Vincent (Caribbean) and in historic resources in Southern Ontario for a summer in the early 2000s, before coming to Alberta to start my Masters. Once in Alberta, I worked on surveys and excavations throughout the province, with small stints in Idaho and Yellowknife, but now work primarily in British Columbia (Central Interior).

What was your most exciting find?

This is always an interesting question to answer (over 25 years, there have been quite a few finds). While excavating outside the fortified walls of an Iron Age city in Jordan (currently the town of Madaba), we encountered a closed and sealed room (we were excavating through the second story of a structure downwards towards the main floor of the building). Once we were able to access the room (through a small hole in the mosaic floor of the room above), the room turned out to be completely empty and vacant, just a dark, black void). but behind the project director, I was only the second person to breathe in that stale air in over 1000 years; it smelled like old, sweaty horses, and was probably cursed.

Maybe I wasn’t cursed after all; I was fortunate enough to spend time on two separate projects in the Caribbean, one CRM related and one research focussed. The archaeology itself was pretty exciting, but the most exciting component of these projects was the interaction with the public. Through radio interviews, newspaper articles, tv interviews, public outreach, grade school field trips, and stopping passersby, we had the opportunity to interact with the public sphere almost every field day, in real-time. Seeing and partaking in the interaction of the local populations as we recorded their local history and the personal reactions of the Vincentians to their home-grown history was incredibly rewarding on a personal and professional level. This was probably my greatest find in archaeology, not an artifact, not a site, not a structure, but experiencing the personal connection of a living population with their own buried history, a history that had been long forgotten, but remained hidden under their feet, roads, houses and fields.

What was your favourite place to work and why? 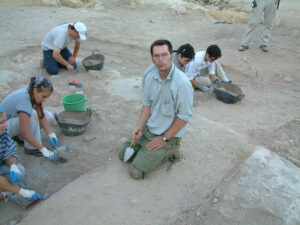 I really enjoyed my summers working in Jordan. I was exposed to so many archaeological sites, projects and experiences and a variety of methodologies (working with holistic and multi-disciplinary teams); and was afforded the opportunity to engage in cultural experiences which were unique and foreign to a small town kid (who had never left Canada before). Over the years, I could tie in vacation travel after the field season to places like Israel, Egypt and Rome.

What’s something most would find surprising about a place you’ve worked in?

In Southern Ontario, while working on surveys, we stopped for lunch every day at one of several Tim Hortons/Harveys combo restaurants. Our field director was a vegan, and apparently, Harveys had great plant-based burgers (even way back in 2002). Although a Tim’s lunch 5-days in a row, over several months, can be hard on your stomach.

Do you have any advice or information for other archaeologists?

A career in archaeology can be hard on your body (and your liver). Taking care of your limbs (knees and elbows) and your back while you are young and healthy can be a good key to a long and enjoyable career. I wish I had learned to stretch, do yoga or work out when I was young. Also, occasionally drinking water in those evening pub sessions might have prolonged and saved my liver and kidneys from an abusive relationship.

For several years, we were working on a large-scale Pre-Pottery Neolithic excavation in Jordan. On a few occasions, on the first field day, I was in charge of un-backfilling the excavation with a team of workmen and then re-establishing the excavation grid. It was hard, sweaty work, but we did a good job. After a few days of measured excavation, I began to notice that all my provenience measurements for the 5x5m excavation block that I was in charge of were not matching any of the spatial data of the other excavators. I spent 6 hours under the hot Jordanian sun, attempting to figure out why my datum was out of alignment with all the other staff. By dark, I gave up and headed back to the dig house for a liver-abuse-inducing round of lukewarm Amstels. The following morning, with a much cooler (but foggy) head, I tested my several-year-trusted line level against the line level of those around me. It was my last hope to solve the error in measurement before I quit archaeology for good. To my shock and my everlasting hatred, it was indeed my line level as the source of the error (with a broken, misaligned bubble). It had no chance of ever measuring level and had probably been reading incorrectly for years. I threw that line level as far as humanly possible into the valley below, I can still hear its screams of laughter and mockery in my nightmares.

Tell us a fun fact or hobby of yours! 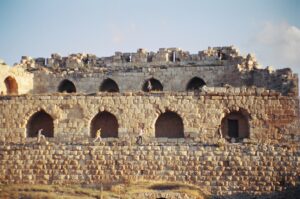 I really enjoy board games (and games of all types, for that matter), anything that may involve world domination, the annihilation of the will and morale of your enemies, and any activities that create a competitive advantage and atmosphere. I don’t always have to win, but it helps.