Archaeology often conjures up the image of dust-covered, Indiana Jones-type figures, labouring away under a sweltering sun, sweat beading off their brows as they scrutinize the fine detail of their latest discovery. Or perhaps, that is the Hollywood version. Maybe the true image is one of a high-vis-wearing professional, gazing intently at their iPad in a wooded glen, with sunbeams percolating through the canopy above. Whatever the image, it is usually summer and there is sun…lots and lots of sun.

It may come as somewhat of a surprise that archaeologists occasionally work during the winter, when the ground is covered by snow, temperatures are dipping below -20°, and the soil is frozen solid. With that, discard the image of the sun-drenched archaeologist and swap it for archaeologists in thick jackets, toques, snow pants, and the ever-fashionable long-johns. Now pour yourself a piping hot cup of your favourite beverage, and let’s talk about winter archaeology. 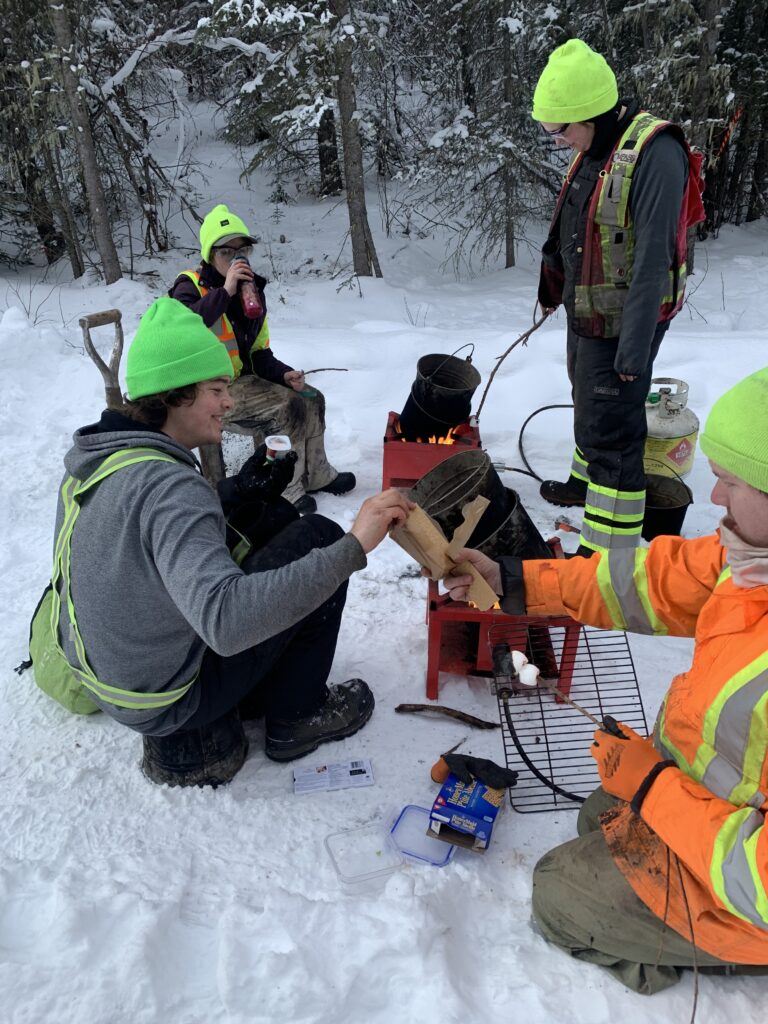 Archaeologists are not the only people who work outside in the winter, many industries do, and it’s precisely for this reason that archaeology is done during the winter months. Since many developments need to satisfy Historical Resources Act requirements before they begin, those who are scheduled to start construction in early spring or summer often need to have archaeological fieldwork carried out over the winter. So how do we do archaeology in winter, and how do we deal with all that snow?

The simple answer is that we try to avoid it – we check the weather forecast and try to schedule fieldwork during milder temperatures. We also try to avoid bigger excavations during winter, at all costs. However, it’s not always possible to defer an archaeological mitigation (HRIM) until spring. When this happens, we usually erect a tent over the excavation to shield it from the elements and use a combination of insulation and tarps to keep sediments from freezing. In this way, we can heat the tent and excavate “indoors” the same way we normally would. No snow, no cold, no problem. 😎

Surprisingly, it’s actually not the snow that poses the biggest challenge in winter archaeology. Snow can often be cleared off easily enough, either by shoveling it away or by using a snow blower (we’re Canadian after all, eh). Snow can also help insulate the ground below and keep it from freezing, so snow doesn’t present that big of a problem. Where snow can cause issues is by making it difficult to access a target area. Trudging through metre-deep snow to get to a shovel test area takes a lot of time and effort, and let’s be honest, it isn’t all that fun. Driving a truck along a newly-snowed-over narrow access road in the dark morning hours of December isn’t either. Snow can obscure important topographical features and impede assessment of locales that may have archaeological potential. Overall, snow is an obstacle, but it is one that we can usually mitigate relatively easily, either by removing it or by taking our time.

The real menace of winter archaeology is the frost. ❄️ Canadian winters can be bitingly cold, and as winter progresses, the ground often freezes solid- SO solid that a shovel(no matter how sharp or forcefully wielded), will never break through. When it’s been really cold for a long period of time, the ground in Alberta can sometimes be frozen past 50-60 cm below the surface. That’s no bueno and can be a real problem for us. How do archaeologists deal with it? Well, there are a few things we can do.

If the ground is not too frozen, we can usually punch through the frozen layers with a pickaxe and some elbow grease. When the ground is in this condition, it sometimes benefits us too, because as frozen soil fractures, it often splits around artifacts or along their surfaces (because the soil and artifact will have different texture and density), thereby exposing them. All of a sudden, a projectile point literally pops out in your shovel test – isn’t that handy? When the ground is really frozen solid, it’s an entirely different matter. Now, we have to bring out the big tools: jack hammers, concrete saws, propane stoves, and tiger torches. 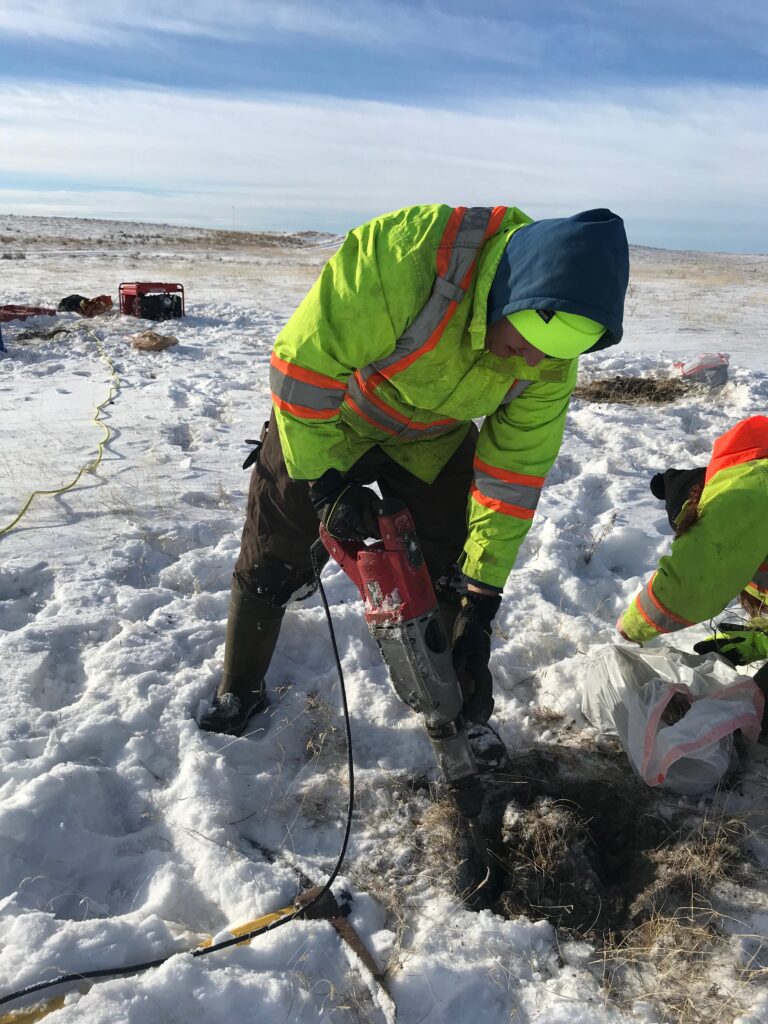 The principle is simple: Get the soil out, thaw it, screen and examine it. In practice, it’s a bit more complicated because frozen sediments rarely cooperate, and each piece of equipment comes with its own set of challenges. Tiger torches, for example, are used to literally thaw sediments before removing them from the ground.This doesn’t take a long time, but it can damage any organic materials that may be present. Jack hammers are heavy and require either a battery or gasoline to operate and are blunt, sometimes destructive tools. Did you ever imagine that archaeologists excavated with jack hammers? Me neither, until I came to Alberta. Jack hammers, if wielded carelessly, can both destroy artifacts and create flakes that resemble artifacts (but easy enough to tell apart from the real thing). They are very much tools of last resort, used when HRIA (historical resource impact assessment) in the dead of winter is unavoidable. If you’re going to do archaeology in Western Canada for any length of time, it’s a good idea to become familiar with these tools, because sooner or later, you will probably end up using them (and need to know how to use them, safely).

Backhoes, which we sometimes use in the summer as well, are not fazed by frozen ground. For winter fieldwork, a backhoe can sometimes be the best option to perform a subsurface assessment provided it can access the location and our schedule of requirements allow for it. The caveat with the backhoe is that the archaeologist is on the outside, out there in the cold, and usually standing still because they have to inspect the sediments as they are being exposed. This brings up the last, but most important challenge of winter archaeology…the cold. 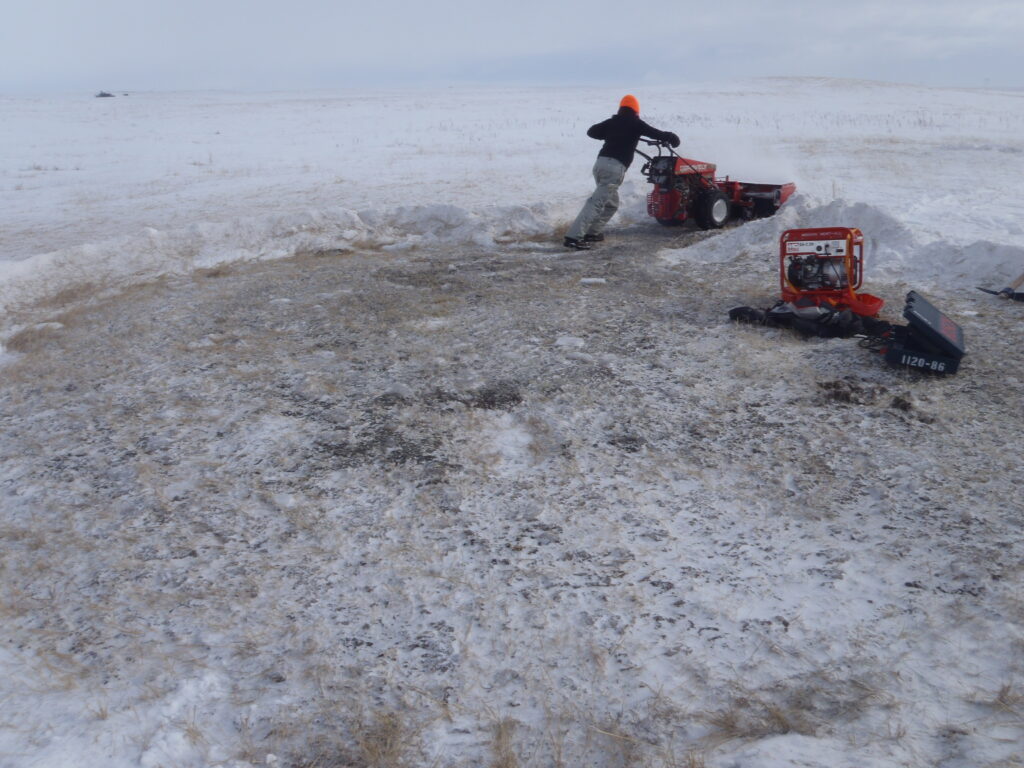 There’s not much that’s worse than finding yourself in -25° temperatures, realizing you’re probably one layer thin from staying warm throughout the day, or finding yourself in recently fallen snow without a pair of snow pants. For winter archaeology, it is more important than ever to dress for conditions and take that extra time to make sure all the gear we need is with us. It’s better to find that we have to remove a layer of clothing than to find we need one that we didn’t pack with us. Preparation, preparation, preparation.

Here are a few other useful hints:

With that said, let’s finish that warm drink before it gets cold. Until next time!